Tonight I decided enough was enough and got the bases done on these. They are finished now, with only a varnish layer or two and some dilute PVA on the bases.

I decided on a different approach to applying the flock to the bases.

I went for superglue…. This was for two reasons, one I didn’t have enough PVA inside the house and secondly the winds were up to 65mph and the rain drops were the size of marbles and the rest of the PVA was in the bottom shed.

I have never tried superglue as a basing glue before so who knows what it is going to look like in the long run.

Anyway the stuff has stuck, so here are another couple of photos from different angles…

And finally from the lance side… 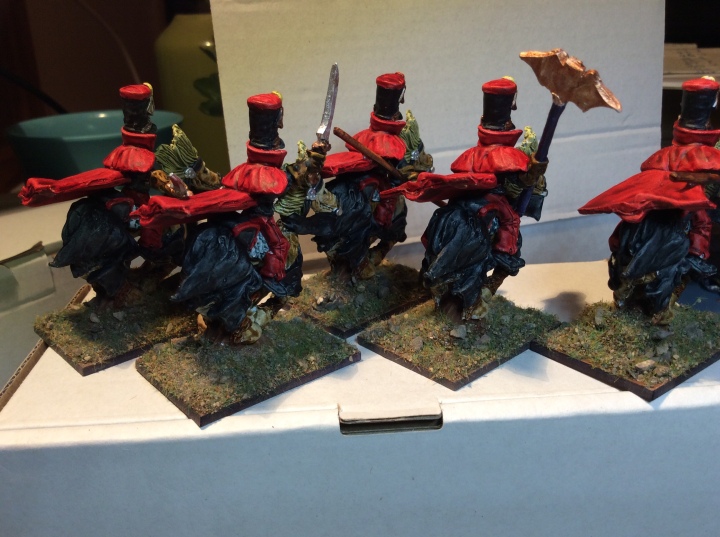 You can just about see the sheepskin on the nearest one. It really has made them stable.

As I said in an earlier post I have missed off the wings and made these terrestrial cavalry.

I really do like the red on these, definitely different to most of the rest of the undead forces.

As I enjoyed painting these the. I might just have to make a start on the Ostarian Hussars. I am still miffed with the hellhounds (childish I know) but right now I really cannot be bothered to paint them.

I was thinking about it today and I have never seen a manufacturer photograph of the hounds near any other miniatures in the range. Scale creep is a thing, but this is the first time I have seen scale creep getting smaller.

Tomorrow I might get the doggies out and make a start on them.