I have worked on this chap for the last few days. 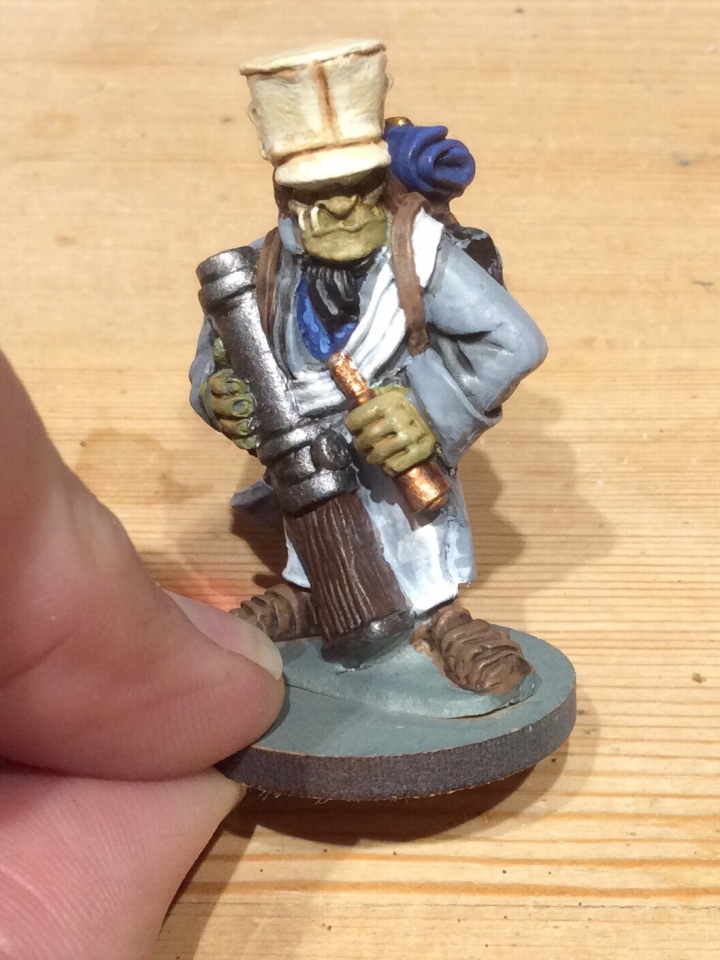 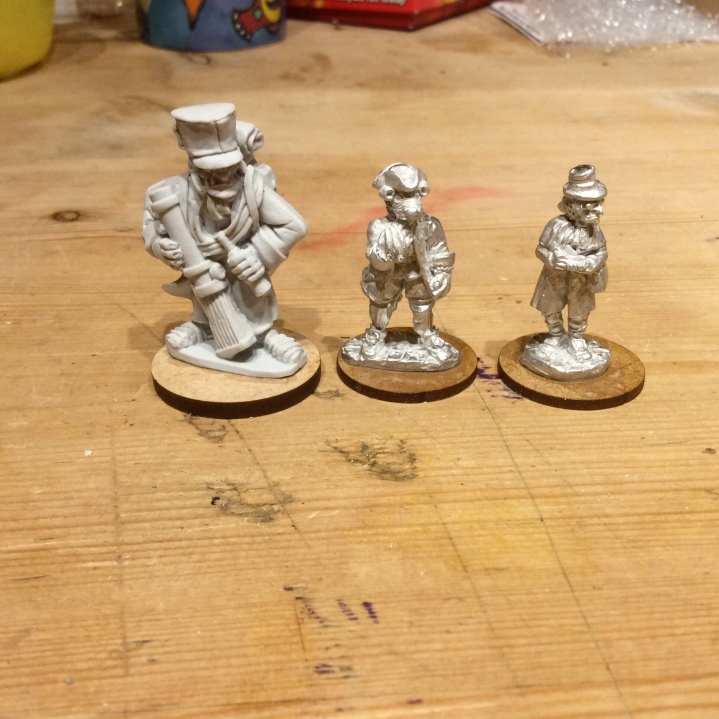 He has come a long way from the bare resin.

He is a lovely figure. Full of character. He is armed with a hand cannon and trust telescope. He is made from resin so super lightweight. I spent a lot longer on this one than I have with a lot of the other ones.

He is to be an officer for my unit of ogres. I think I will make a start on them next.

I have also snagged a bargain on EBay a unit of 7 Ostarian cavalry and a gun and crew. The gun is painted whereas the cavalry are not.

Managed to get these all finished:

Well when I say finished … the crests need a brighter highlight.

Mine are the lighter coats, my mates are the darker.

Not sure what to paint next…

They are undercoated and ready to go.

I had another bash at these tonight.

They are pretty much finished apart from the metalwork on the muskets and a bit of toning down on the grey highlights on the black hats. It didn’t darken down a# much as I expected when it dried.

I also managed to get a bit more done on my Zombies.

They still have a bit to go but I am getting there.

I did some painting, not that you can tell…

Wash put on the Ferach troops. This will need to dry properly before I get the highlights done. I also got their hats done.

A wash was put on the zombie cuirasses.

I will get some more done tomorrow night.

Started on these four tonight.

Half an hour’s work to get to here. 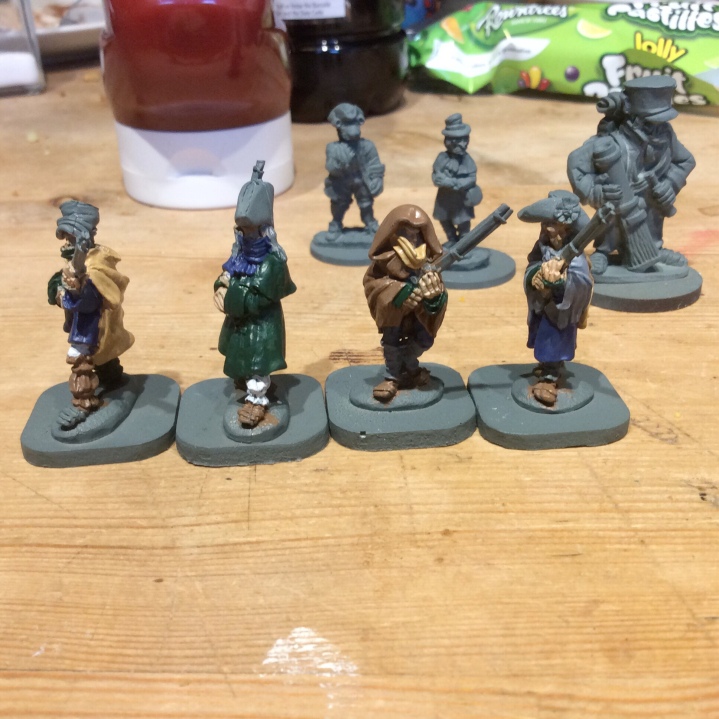 This is a base colour for the clothing and skin, onto washes and highlights later on when the paint dries. Although a rag tag bunch each has the blue and the green colour to help tie them in together.

Hats will be black and no doubt red will appear somewhere too.

The three at the back are mine in the queue.

The Ferach are to add to the Savant Zombies I finished the other day.

Or… who pinched my paint.

I would have got a lot further with these tonight if I hadn’t spent nearly an hour looking for a 17ml pot of paint.

The ones my mate has had painted look like they have a bronze cuirass and helmet, not to mention the rest of the metalwork.

Bronze is about the only metallic paint I don’t have, I used to have a pot of dwarven bronze, but it would seem not anymore! 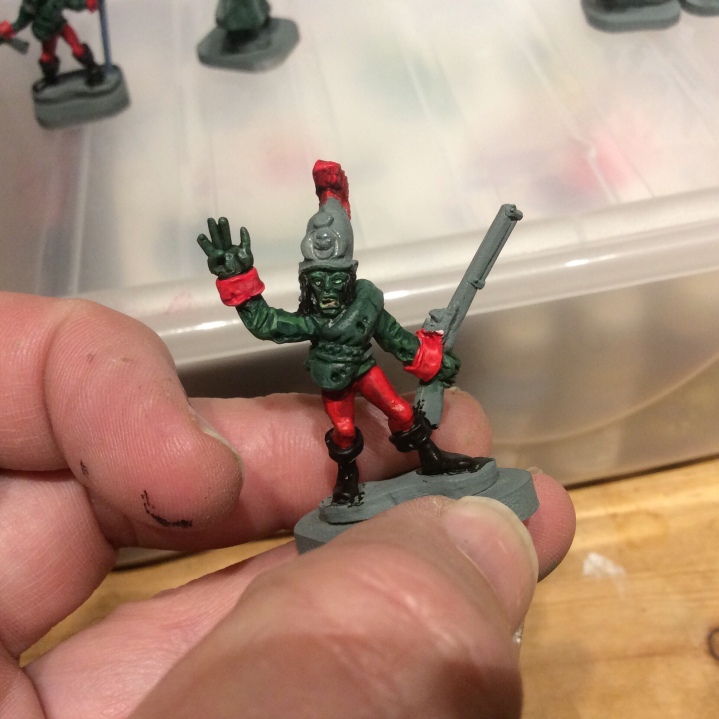 Still a fair bit to go on these, not to mention tidying up, highlighting and basing. Once these are done I need to do the Ferach troops to go in the present. 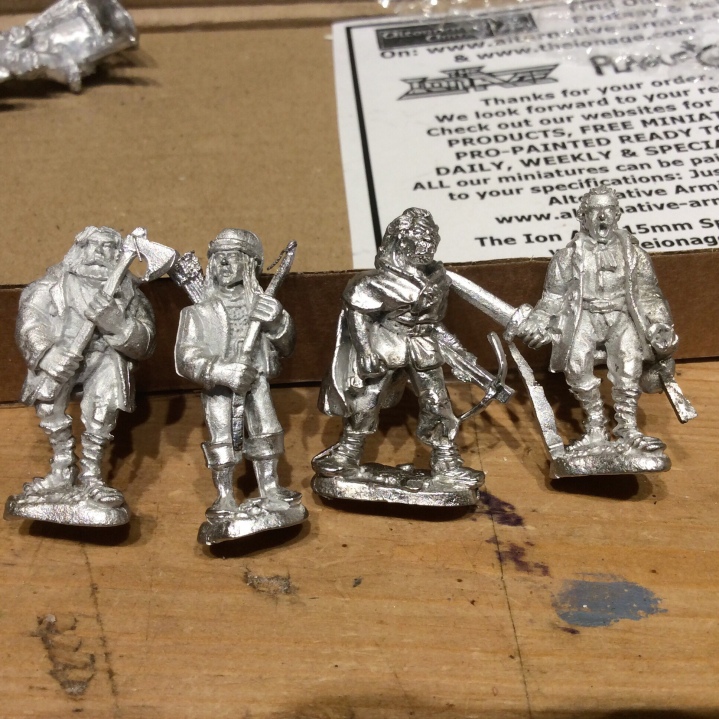 Ferach civilians. These weren’t photographed on the website so I bought them blind. I hadn’t realised two of them were carrying pre black powder weapons. I am a little bit unsure about the first on the right as he looks more human than elvish.

I may retire him into my medieval forces and replace him with a dark elf guerrilla or two. The third one in might go the same way. I like both of the actual models but they don’t particularly shout elf to me.

I also purchased a ghoul officer and some of Zoltan’s 666th foot. This officer has quite a bit of flash on him, but it is nothing to worry about.

I ordered five and ended up receiving six. These are to bring my zombie dogs up to a unit of ten.

The other purchase I made was a wet palette. I have made my own before, but as I had made some money I decided to splash out. Evidently I didn’t read or even look at the dimensions! 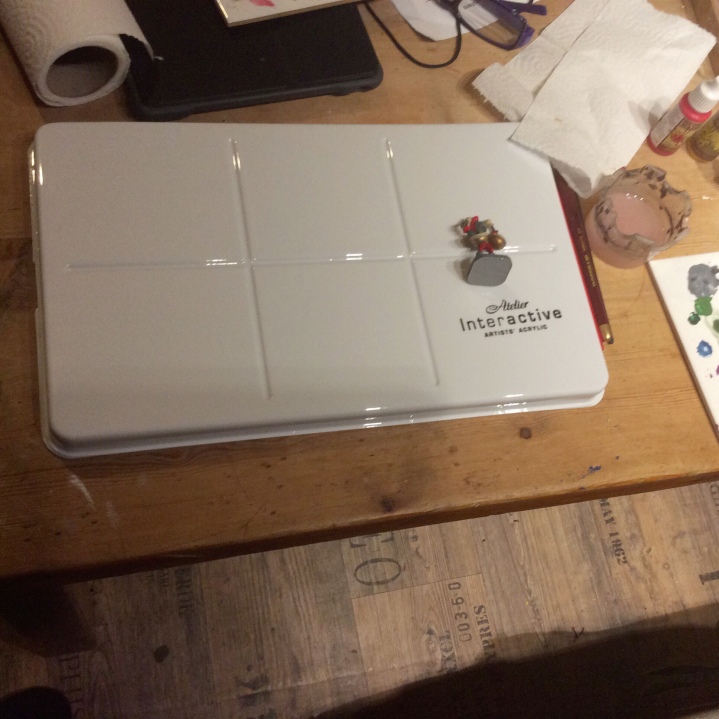 A 28mm figure is sat on it. I decided to keep it as one of my daughters loves painting, but next time I shall take note of the dimensions.

Tomorrow I go on a shopping expedition to find some Bronze paint. Luckily the local toy shop sells GW stuff so will have a try in there.

Adding lights into my shed took a bit more time than expected.

I still managed to slap some paint on these tonight. I am not sure you can actually tell in this picture. 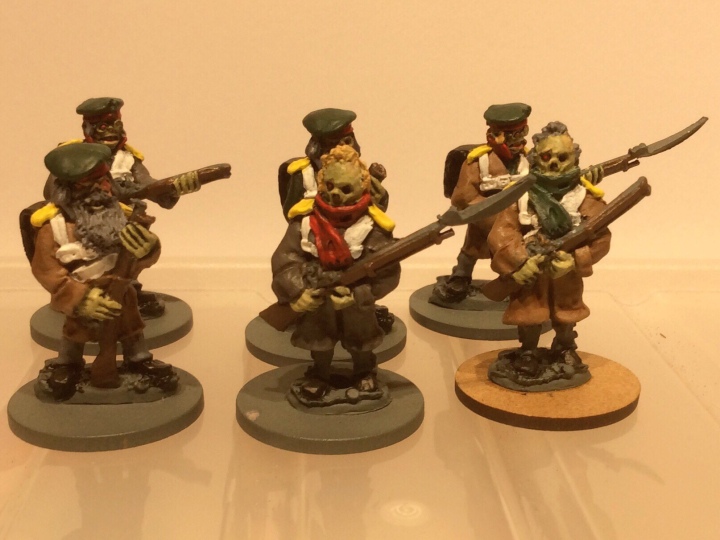 My purchases are thus:

The new Savant zombie colour party with sergeant, drummer and standard bearer. The rest of these in the range are resin, these however are white metal.

Below the zombies are a selection of Ferach troops from the Witchland’s campaign. These poor souls are wrapped in blankets and heavy coats to keep out of the cold. I will be painting these up for my mates birthday present.

The one thing I was not expecting was the amount of flash on the flag bearer. This, I can honestly say is a first. It will take a couple of minutes to sort out so there are no issues there. The other two zombies have a bit of a mould line so I think it was a bit of a wobble with this individual figure.

Next up are my toys.

Another four Savant zombies to take my initial squad to ten. I really do like them in their cloaks. If the colour party had been modelled wearing them I might have been tempted to get some (I am still not sure about kettle drums in a skirmish game).

A bit of a clean up is required but it won’t take long.

Next up are another couple of civilians. 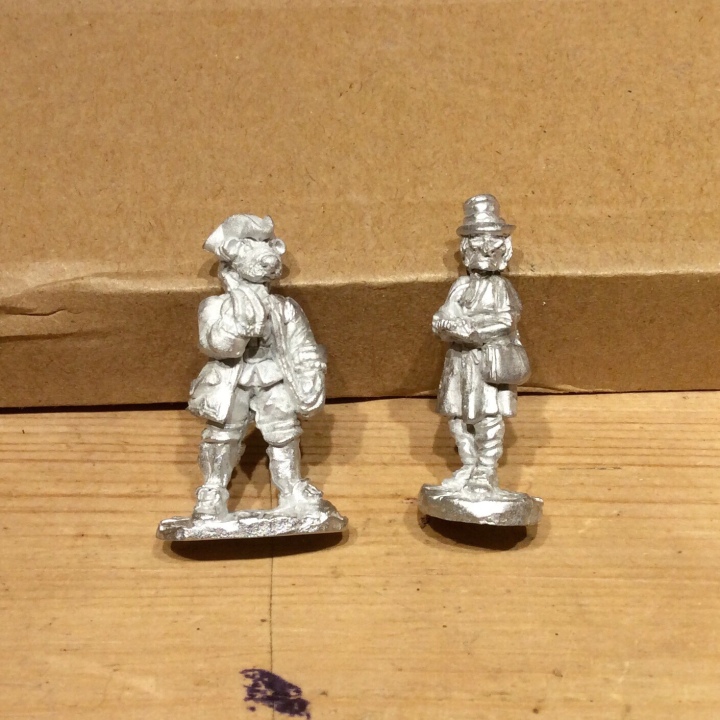 An Othari aristocrat and a hobgoblin miser. These are full of character, the Aristo is wafting his, no doubt perfumed, handkerchief whilst the miser is writing something down in his notebook.

I really do like the civilian figures from the various ranges. It is my aim to collect them all.

Last of all was my free pile of carrots 🥕. As I got these models under an offer I received free postage and another set of carrots.

I decided to have a little bit of painting time today to finish of Madame.

Another great little set fromAlternative Armies. I got her primarily as I am trying to get lots of civilian figures; but she can be used in both Flintloque and Slaughterloo.

Madame is of an ancient family line and is the last of the same. She travels Valon with her trusted manservant. Here we see her dressed in her finery. Her hair is so high it requires the manservant to follow her around holding it up with his hair pole. 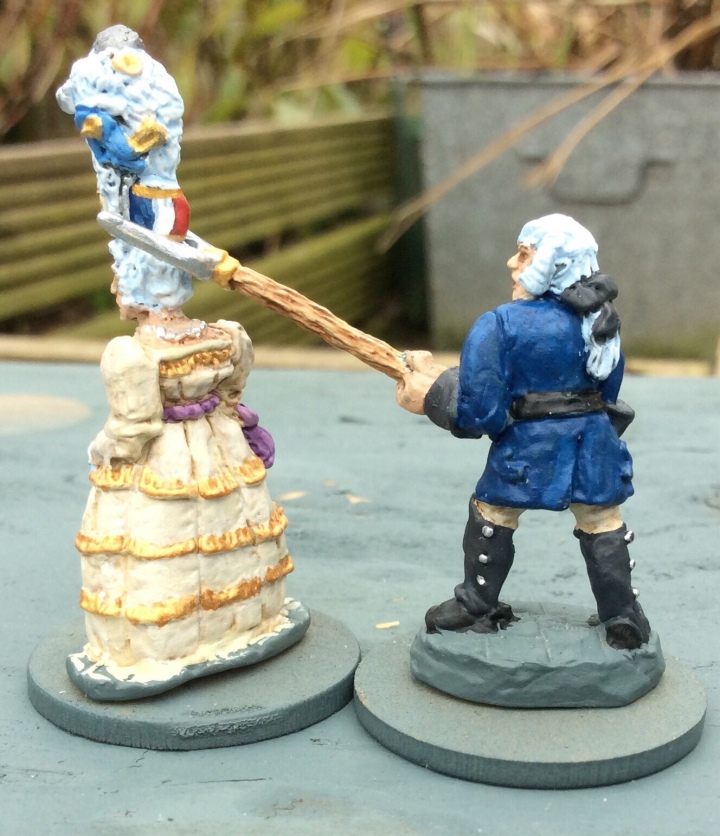 It really is true what they say… The camera does indeed show everything. I have just noticed the belt buckle on the manservant has bled onto the black belt (which I have obviously forgotten to highlight too).

Tonight I will crack on with the surgical sets tables etc and make a start on the engineers.

I redid the belt and added the various highlights.

I am just about finished the full set.

A bit of a tidy up and some darkening around the eyes especially on the two on the left. Really only just the stretcher and equipment table to sort out… 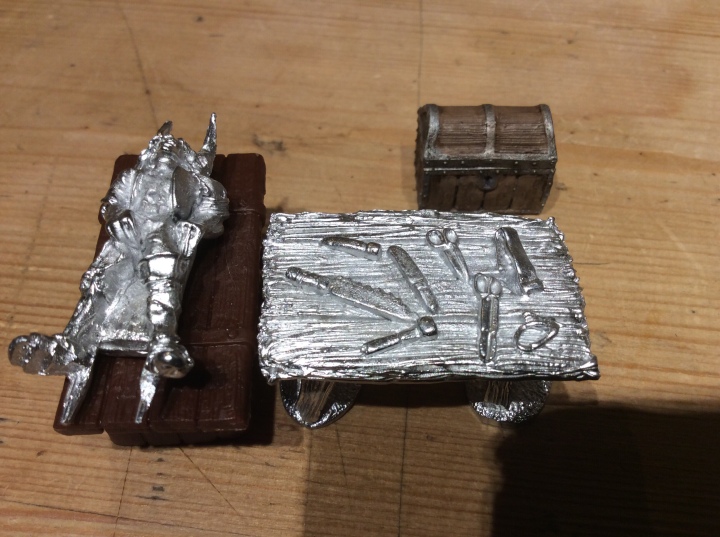 I have added a couple of plastic pieces too – a table for the surgery and a chest to hold all the tools.

I really like this set. There are three of them that can be used as civilians. The surgeon on the right would make a good barman.

Not sure where I will go next. Perhaps Lady Pompaboom.

I received my new figures today. I have been very resolute and they are still sealed in their box. I will open it tomorrow and get some photographs taken.

I managed to get a pile of figures undercoated this evening.

First up is the medical team. Two surgeons a stretcher bearer team and an auxiliary.

This set also contains a gentleman surgeon as seen last week and a rather nice ex soldier with a wooden leg (not to mention a wounded elf on a stretcher). 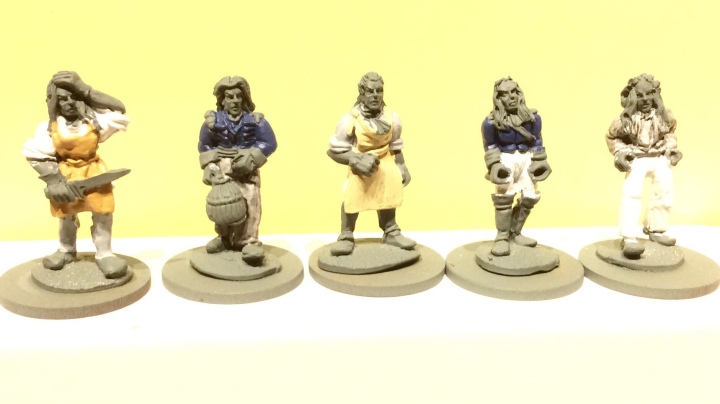 Next up is a group of canine engineers. 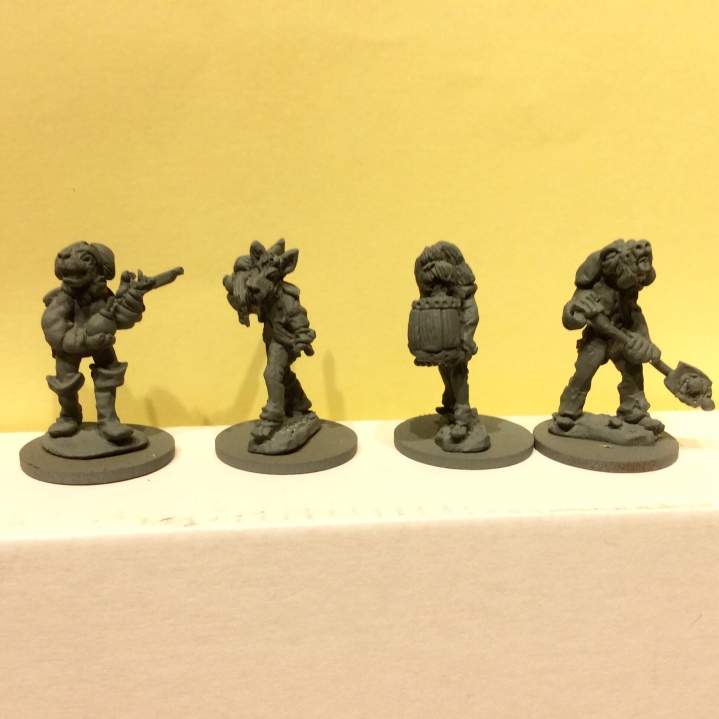 This is another nice set. The first would make a rather nice assassin with a bomb and pistol. The second is carrying a plank, the third a barrel, while the last is obviously digging up his bone. He, like me, has a concentrating tongue – it sticks out when we are concentrating.

This rather hatchet faced lady and manservant is a rather fun set. With her ladyship’s hair being so high it requires him to hold it up. She almost conceals a bomb in her towering hairstyle. Her head and hair are a separate casting. I couldn’t work out where her face had gone. Being the pillock that I am, I was trying to put it on upside down. I thought the fuse on the bomb went into the hole on her neck 😱😱😱.

I am thinking white and gold for the dress…

I did manage to finish one of them. 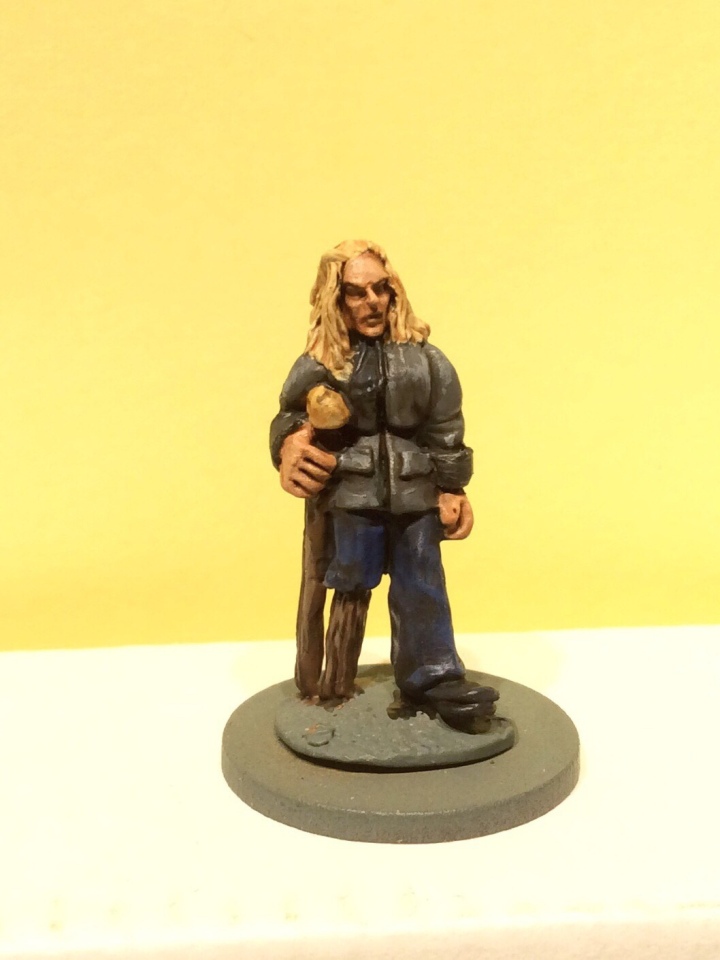 I really like this figure. He comes with the field hospital. However, I think I will use him as an ex soldier.

All in all another eclectic mix of very nice figures.