Well the nice people from Creality came back to me again, asking for more photos and advice on what to do next. I unscrewed the power unit from frame and then the plastic cover from the power unit.laid it down and switched on the socket to check the voltage and voila… power to the whole machine.

Checked all connections and they seemed fine.

Put everything back together again and the power went off again…

Fiddled with the wires…power came back on again….

Fiddled with a connector and the power came back on again…

I restarted the print and watched the connector… as soon as it moved, power went off. I therefore got a glass jar and blue tacked the connector to it.

It worked well, right up to the point the tension of the wires popped the blue tack off.

More blue tack later I managed to print a 38T. You can see the extra blue tack in the background.

This one took 2 hours 3 minutes to print…

I am printing another one now to see how it goes. I have contacted Creality again to let them know where things lie now. It looks like either a loose connection or a fractured wire, so I am keeping a close eye on things.

The other thing I managed to do was to spray the Allied tanks… apologies for the purists amongst you, I grabbed my Army Painter Desert Yellow and blasted them with it. 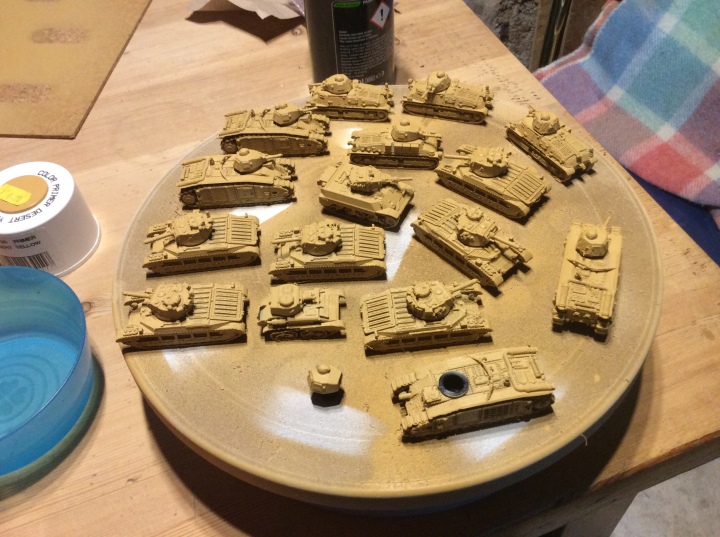 Originally I had only done the French tanks as I reckoned they had ‘interesting’ camouflage patterns and I could get away with it, then I thought bollocks, I only have a couple of weeks to paint them all and I don’t have a British paint colour, so they got a blast too.

I must remember to print off a new turret for the Char B now that things are limping along.

I am going to get the short barrelled Stug III sliced tonight ready for printing tomorrow… not to mention any other Axis tanks I can think of.

6 thoughts on “Tanks… Off He Goes Again… Maybe”