What with one thing and another today then I never got anything painted. Technically I went into work today to clear out my desk before starting the new job and ended up chatting to colleagues who I haven’t seen for about 10 weeks so… I will need to go in and sort out my desk another time. I then went out this evening with some of my colleagues for our regular catch up meal, just back in to get this written up.

Modelling wise my day wasn’t wasted. I got thinking of the Scalian Forces and how they would need themed terrain. So off I went to look on Thingiverse. It was then that I remembered my humble bundle I bought way back in March. Something was making me think that there were Jungly things in the pack. I fired up the computer and had a look. 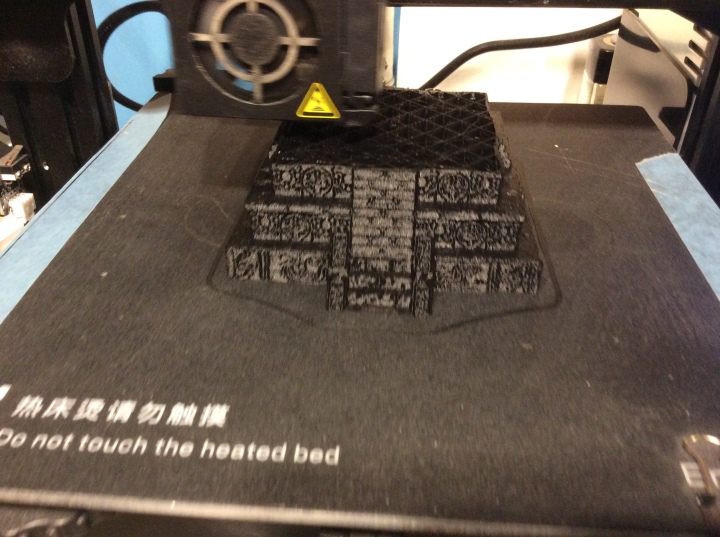 Apologies for the naff photo, but it was moving quite quick and the iPad couldn’t keep up. I found two pyramids, a jaguar temple of the moon and various scatter pieces too.

The other thing I found were some 3D printable Lizardmen. I took a guess at reducing the size to 70% and I ended up with this size.

You can’t really see him properly as he is black PLA but he does fit in nicely with the general figure. He will be joined by a few more to make a unit of larger lizard warriors akin to Kroxigor in Warhammer.

I also printed off some carved disks. Because I printed them flat the detail isn’t as good as it could be had I done them vertically. Problem with a circle is that it needs a whole lot of support to go vertical.

So no painting done but still something to show at the end of the day. The lizard is from Fat Dragon Games and for the life of me I cannot remember the maker of the terrain stuff. Lizard took 45 minutes to print, whilst the pyramid is just over 6 hours.

The jaguar temple is going to be nearer 10 hours. I will set it away tomorrow morning and see what appears at the end of the day.

4 thoughts on “Scalians… Something a Little Different”