I have pretty much finished the Samurai, apart from all of the white I have noticed in the photo. I also repainted some white in on the lizards. 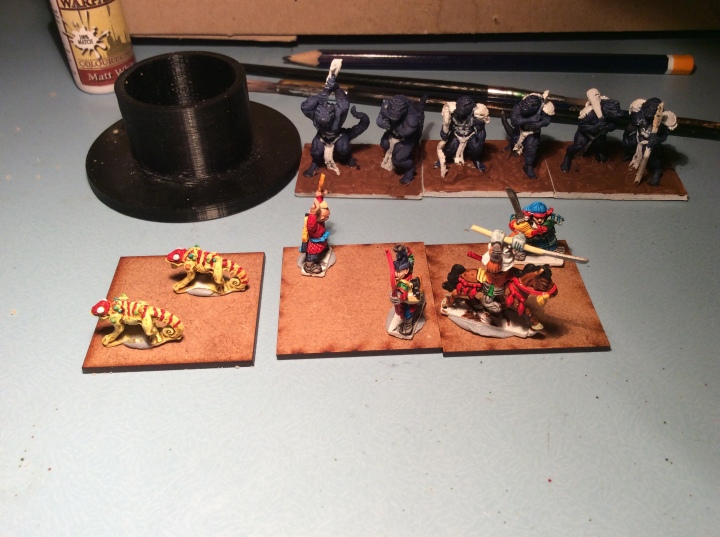 To be honest these were a joy to paint, a whole lot longer to do than the Aztecs or Conquistadors but still really easy to do especially with the Contrast Paint. As with the two other armies I am going for speed over excellence. That is not to say that I am not trying, but there is no shading or highlighting as I want to see how I get on without all of the extra bits – lazy…possibly but I am getting armies done in weeks rather than months or potentially years – possibly not at all.

Take the Aztecs, I bought them in February and never touched them I gave them a go with Contrast paint and that was them done, I purchased more and got the new lot done in just over a week.

As for textured paint –

Now, as you all probably know, Contrast Paint is a high pigment thin paint. Tonight I achieved the next iteration of the range. I am calling it Contrast Plus. It is textured contrast paint…

the reason being this…

My daughter very kindly gave me some of her home economics baking. It was indeed very nice, sadly a piece fell off straight into my pot of yellow paint. I think I pretty much fished it all out…only time will tell.

Today I spent two hours filling in a form to tell the Scottish Government that I had 4 pupils in my school’s nursery class. One of the questions wanted me to give an age of a pupil that wasn’t accurate based on the date of birth. The child was three plus seven months, however according to the dates they gave on the form she was actually meant to be four. By the end I was doubting my own ability to add up.

So I phoned up the support person who said that I really should fill it in based on the dates they gave, if I had done then it would have been inaccurate. In the end I filled it in my way, poor bloke, I must have phoned him up a half dozen times, luckily he was an ex colleague who knows I wasn’t just being an arse. The rest of the day was sorting out a school Website as we don’t have one…. ahh the dizzy heights of school management!