Well tonight I managed to get another three wall bases done. I say bases, but in reality I may just leave them as they are. 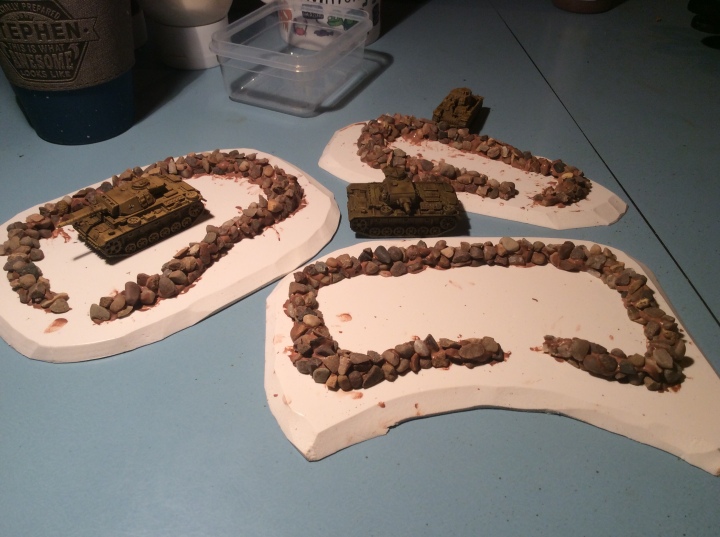 This lot were a lot messier than the last one as I mixed tile grout, Wood glue and brown paint together.

Needless to say I dropped things in it, put my elbow in it and generally made a bloody mess.

I reckon I am going to leave it with these 4. I also have the houses (some will be based together), I have hills and I have palm groves. There needs to be enough terrain to make it interesting but not so much that it is like street fighting.

Tomorrow I will get a well built or printed and then get some houses stuck onto their base. I printed lots of spare walls so hopefully I can make things interesting.

Today, as I mentioned yesterday, I managed an actual game. I got to play Star Saga, for those that don’t know, it is a Sci Fi dungeon crawl (or should that be spaceship crawl). It was quiet enjoyable. Four of us basically ran around lots, shooting anything that moved and somehow, against mounting odds managed to win, by escaping the level. It was funny seeing the same miniatures I used for my Mobile Infantry being painted differently and used in their intended game. Much fun was had by all.

The other thing I got today were the Ninja from Battle Valour Games. I am rather chuffed that scale wise they are pretty damn close. Aesthetically different in appearance, but aren’t the teeny tiny miniatures I was worried they might be. 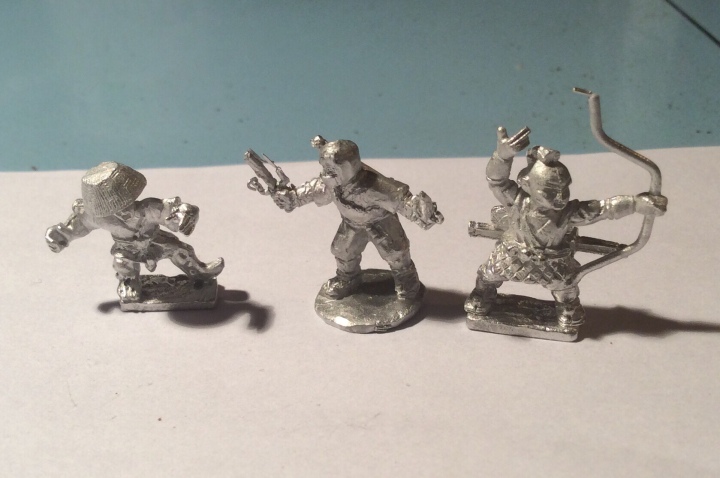 Above we have a TS peasant, a BVG ninja and then a TS archer. They will certainly do the job. In this case the TS minis have a whole lot more detail, but a ninja, in a typical ninja suit doesn’t exactly have a whole lot of detail to have. On the up side, they are all unique poses, armed with ‘typical’ ninja weapons and equipment. The only archetypal weapon missing is a throwing star.

These are not as cheap as the Tin Soldier ones. £2.75 for eight miniatures with TS, the Ninja came in at £4 for six minis. This is certainly not a criticism, merely a statement of fact. The BVG sets, have civilians as well as ONI and also undead warriors which are very tempting. The other thing is they come with the sashimono and don’t need to purchase them separately.

Although I am technically on my hols I am going to go into work to do some paperwork 😱. I need to make sure everything is up to scratch before the kids go back in a couple of weeks.

I shall Carry on with preparations when I return tomorrow evening (or afternoon if I lose the will to live).