I got the final warrior built this evening so that is all four done, apart from their muskets which I am leaving off to allow me to ain’t the miniatures easier. I certainly had a Eureka moment this evening whilst working on this one. Evidently if you leave the arms off then you can get all the fiddly bits glued on a lot easier!

I really do like this set, and am pleased with how they have gone together. I still reckon they are going to be a right sod to paint, especially all the beadwork on pretty much everything!

After taking the photo I noticed at least a couple of mould lines that I had missed. Once the glue has totally set then I will get them scraped off. I will try and get these onto a wire tomorrow and then sprayed at the weekend.

I am a bit worried that the right arm of the back warrior is in the wrong place and might cause his musket to get in the way of the seated miniature. Only time will tell.

Hopefully I will feel like painting something tomorrow. I also thought I might dust off the old 3D printers and give them a bit of a run.

Tonight I was knackered so decided to just build another model, but ended up doing almost two.

These were not as straight forward as the first one as they have to sort of go together so thankfully I was using plastic cement which did give me a bit of movement until it went off fully.

The biggest problem I had was with the nearest model, the arm looked a bit weird no matter how I positioned it. The other annoyance was the hands on both of these are separate. Somehow I managed not to lose any of the small bits…

The nearest one still has his loincloth to add as well as his medicine pouch, powder horn, knife and war club.

I am actually looking forward to doing these, not sure why as I reckon they are going to be a sod to paint properly 🥴

Well tonight I blasted a bit of paint on the Knight and then lost motivation, so instead of messing about with colours on the frocks of the two female characters I went for a build option instead.

So the first of my four figures is pretty much built. I have the musket to add but will paint it separately.

I was trying to think of a nation to do him as, my first thought was Iroquois but I am not sure now. Most pictures I have seen all of them have ear ornamentation. These guys don’t seem to have so new thinks are required. The box doesn’t help as it simply calls them Indian wars kit number 1… perhaps I am overthinking this!

To be honest I am glad I like this one as, err I just bought another couple of sets, more First Nations and then a female post apocalyptic survivor with a crossbow… it’s not as if I haven’t got three thousand plus bits of lead and plastic to paint already… hey ho…looks like I never ever learn!

After Procrastinating for a good while, I eventually managed to paint the flags…

And then after third attempt on the white flag it suddenly dawned on me it was wrong again….in the words of Corporal Nobby Nobbs of the Ankh Morpork City Watch….

The squiggles should be inside the cross!

You know what… I think I may leave it the way it is.

Tomorrow I may start on the Woodland Indians.

The other thing coming up soon is the Shetland Games Day. This takes place on 6th October. Now the question is what should I run… so far I have done:

The humans are Magister Millitum Eskimo and cave men. The adult mammoth are Pendraken, babies are Irregular miniatures 6mm Tusk mammoth and the rest of the fauna are Magister.

The human hunters are Pendraken (WW2 Russian Snipers) the dinosaurs are Magister Millitum. Each person took a two man team and had to shoot the male triceratops to win. The other dinosaurs were there to either get in the way or to eat the players.

The Figures were a mix of EM4 pre painted as well as some Westwind ones. The rules were EM4 too. The arena was scratch built for the show.

I may have to dust off my Sudan stuff and get the players to brave the hot desert wastes as they struggle to save Charlton Heston in Khartoum.

The other option is xenomorph hunting with the colonial marines… I shall have to see….

Almost there with these.

Just really the colours to go. I am still to decide on a regiment (or two).

If I have one complaint about these, it is that the sergeant’s muskets look more like a one from the turn of the 1890’s. To be honest though, the way they are standing means you can hardly see the musket unless you get down to table level.

Tomorrow I decide on the flags. As a total aside. I painted these with the GW starter brush that came with the Conquest magazine. After initially moaning about the quality I managed to get everything on these done with it.

This is what it looked like after fifteen minutes of painting yesterday.

Managed a smidge of painting tonight. 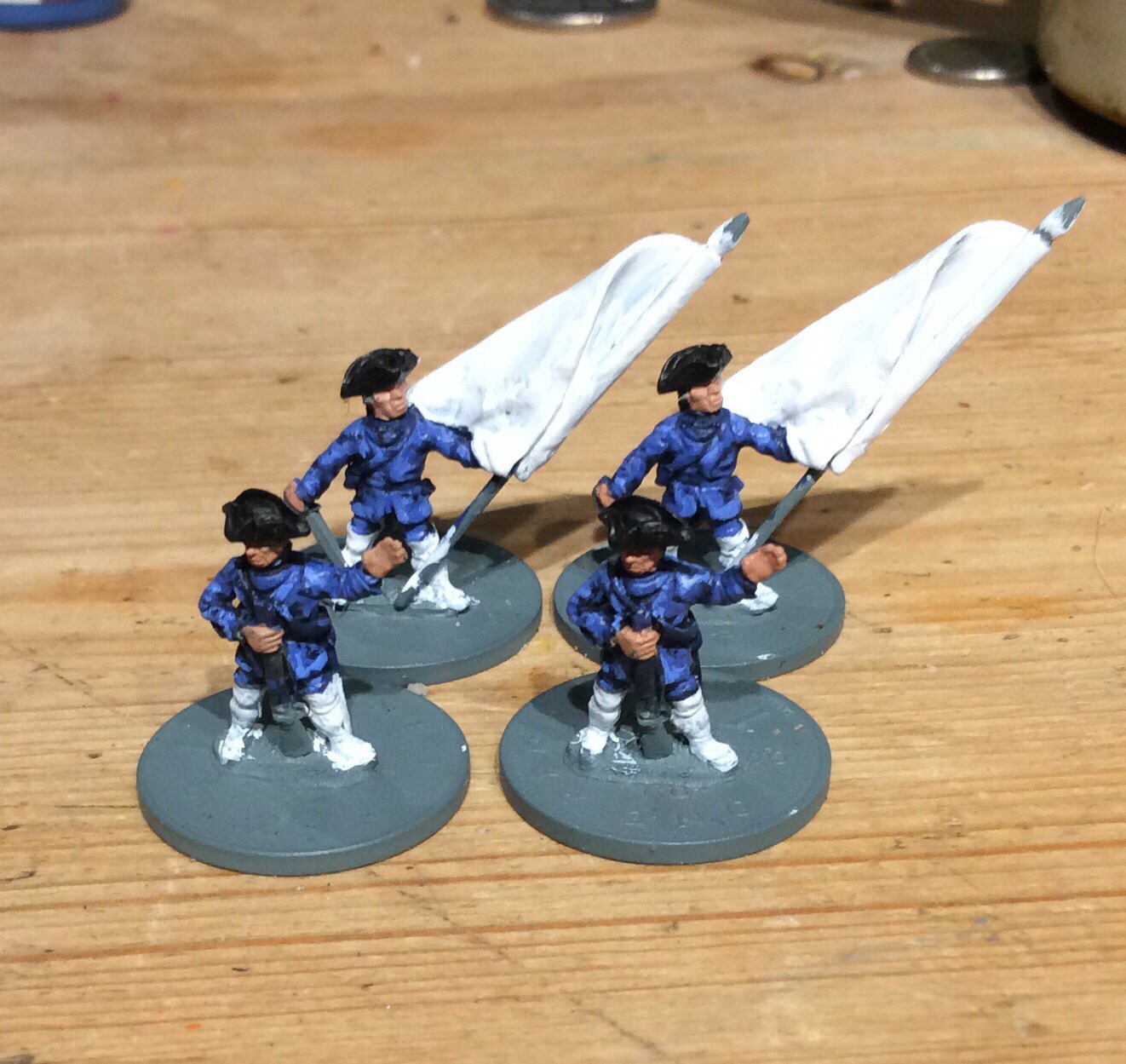 Got some blue and white onto these.

I decided not to go near them last night as I was in a foul mood. I decided that even the calming process of painting would not have worked. Not even sure why I was in such a bad mood.

I still have to decide on the colours, more than likely one of the quartered ones (as these would be easiest) for the regimental one and the Kings colour.

Still a fair way to go, but happy so far.

It was rather a nice evening so I managed to get a nice photo over Scalloway castle. 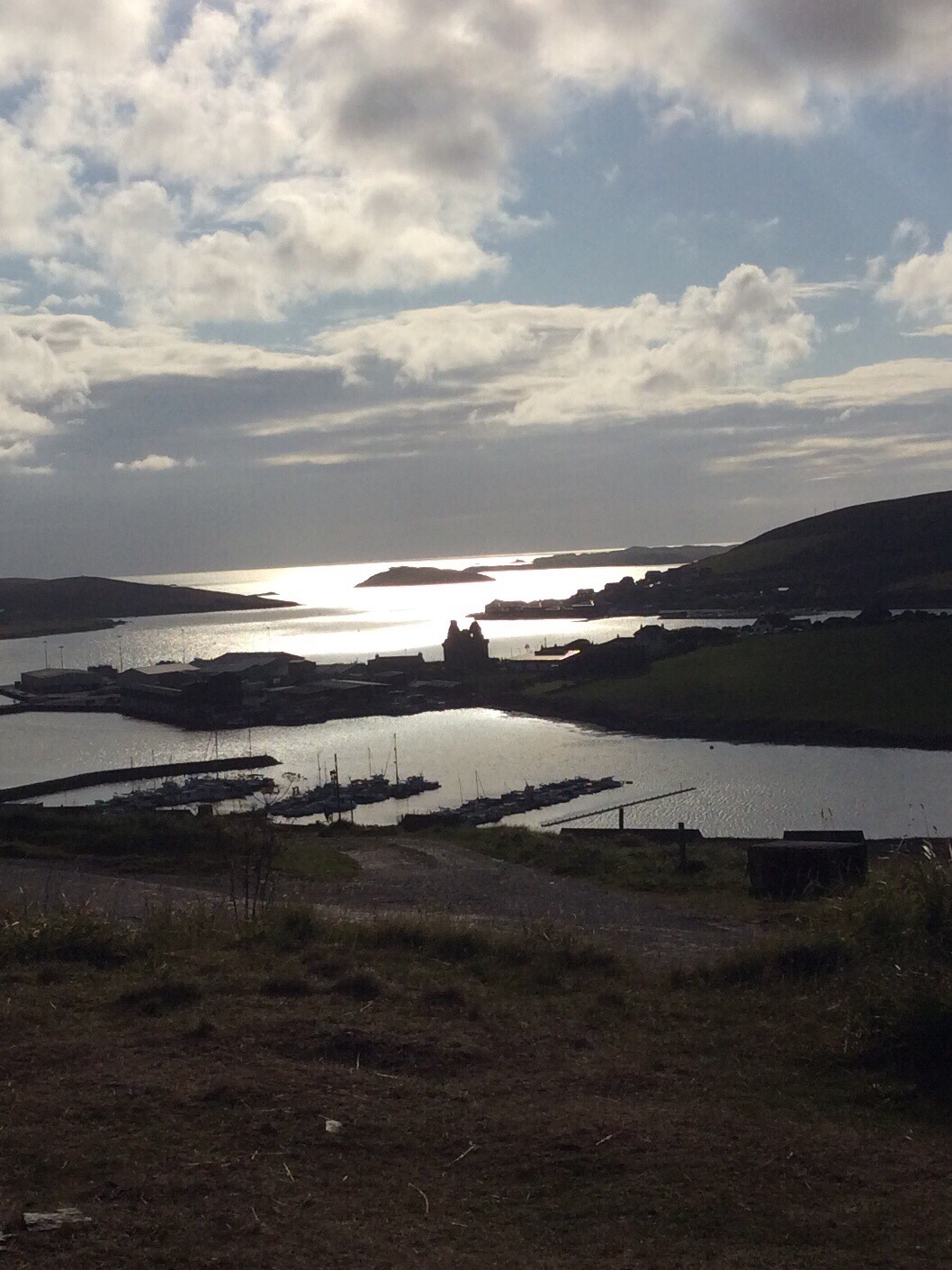 Scalloway is the original capital of Shetland. The castle was built in 1601 and is a nice ruin to tromp around in.

As they say in New France.

Those English upstarts are in for a bit of a shock when these appear…. or maybe not as my opponent may read this!

These were finished a lot quicker than expected. Out of interest whenever I say finished I mean painted. I am going to sort the bases out when everything is painted. That way they will all look the same. Too many times I have finished a unit and then, when put next to the one before I realised that the flock was a different shade (being a total pillock I would base them based upon memory rather than heading out to the shed to check).

I also managed to get some more done on the HQ. 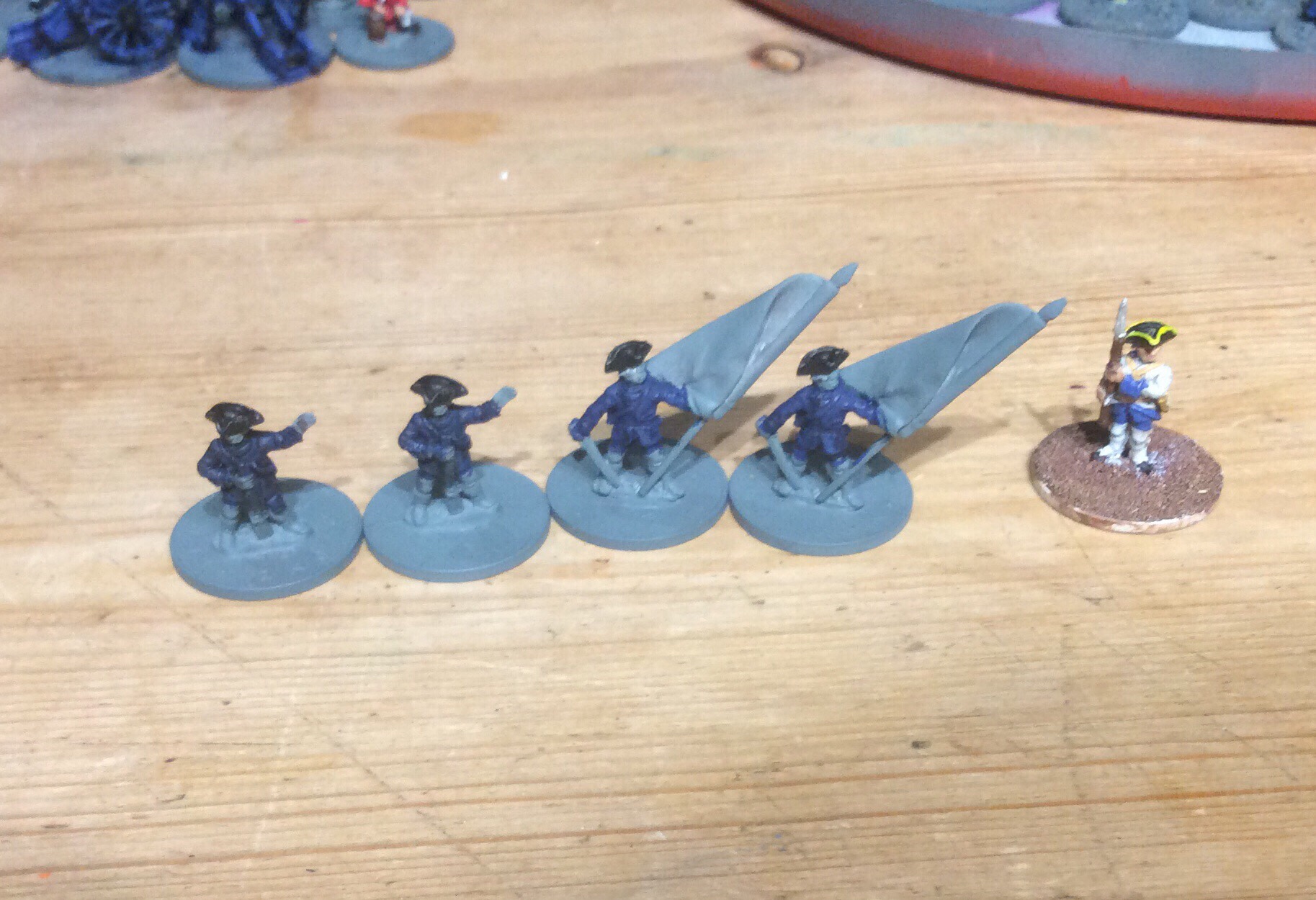 These are in the tunic rather than the soldiers coat. So mainly blue with white gaiters and a black hat. I am not looking forward to painting the colours. The problem is they are folded! I already have two colours, regimental and kings colour so these are pretty much going to be spare.

If I look at it another way…it shall be a mini challenge!

Oh and I succumbed…

I ended up getting three….I will never, ever have to buy gold paint again….

My little boy loves painting every so often so a nice cheap way to let him.

I must get some more heads and arms to make them a bit different.

Today was a bit busy,

I was trying to get the entrance to the shed wind and water tight. Managed it even though the double glazed window became single glazed… don’t ask.

Anyway a bit if relaxed painting calmed me down a bit 😖

I have decided to put a glaze over the red to try and blend in the colours a bit. To be honest though the look much better at about a metre.

Still a long way to go, but still keeping the momentum up. Tomorrow I hope to get the crew finished. Not to mention some more done on the howitzers and a start made on the infantry ensigns and sergeants… which I keep forgetting about… not to mention my long haired militia man (a simple conversion from hat to hair). He was my original Hawkeye. 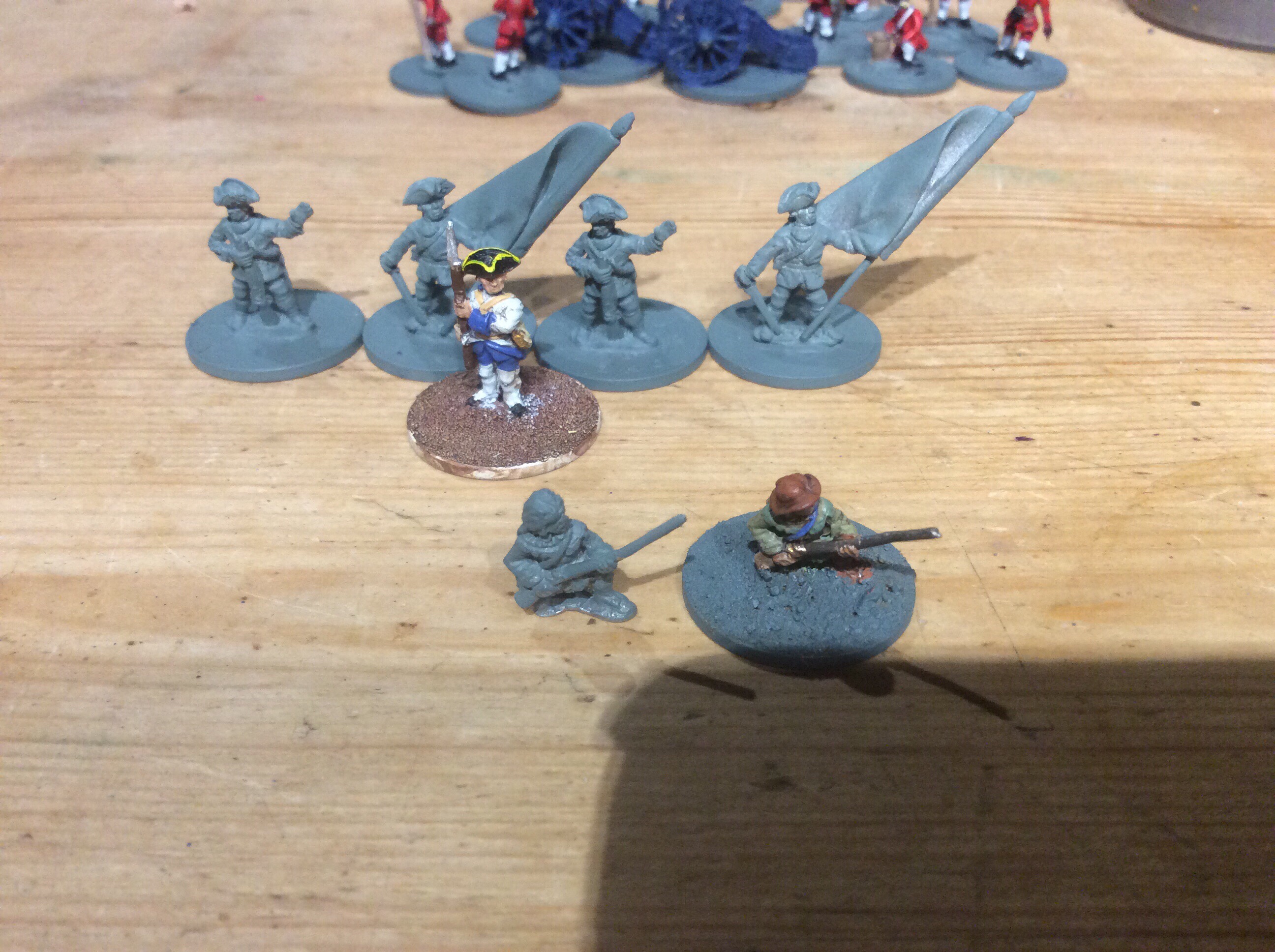 The shed… with the new an improved window…🤬🤬🤬

These are not in their coats, so they are basically red uniform, black hat and white gaiters. I have seen some depictions of the gaiters being black, but as everything else in this force is white it might look a little odd.

They are sitting drying as I just shoved a dark red wash over them. Tomorrow I will paint the dragon red and then highlight with the bright red.

The artillery will get a dark wash, and highlighted with a lighter blue. Metal work on the carriage is black with a bronze barrel. Again…shouldn’t take that long.

I have actually fired a 12lb cannon (minus ball) I helped crew a gun when not messing about as a cavalryman. I faced said gun as a British Light infantrymen a couple of years before. It was much more fun firing the thing than watching it go boom towards you!

Huzzah…the colonel leads them out

So next up up we have…

Evidently there were only two howitzers. I have enough for three crews of four. So I am now on the hunt for a cannon to build up the fire power. To be honest I would have preferred a larger base for the howitzers but it was the only appropriate circular base size I had.

These will have red tunic and breeches, a dark blue coat with red cuffs and turn backs. I also need to paint up the ensigns and sergeants that I forgot last time. The officers will match in with the infantry.

As a total aside… my game came!

Once I have had a good look at it, I will write a post about it.